$2,490.00
CARF GeeBee R2 Red/White 1:3.2. CALL TO ORDER. .
Add to Wish List Add to Compare
Email
Be the first to review this product
Skip to the end of the images gallery

Skip to the beginning of the images gallery
Details

The Gee Bee R2 - No other airplane is more notorious, nor personifies the “Golden Age of Air Racing” like a Gee Bee racer! The mere mentioning of a Gee Bee conjures up nicknames like „killer bee“, „widow maker“ and „flying coffin“… Oh, really? While this Gee Bee is definitely not for the inexperienced, it is easier to fly than you might think.

The key to success is that, unlike many other Gee Bee models which have come and gone, the CARF Gee Bee R2 is a faithful scale reproduction of the full sized aircraft. Our Gee Bee even has the same air foil - and that is just one of the reasons why it flies so well.

It has a wide speed range with excellent slow flight characteristics and no bad habits. Like its full scale counterpart, you slow this one down too much and it simply drops its nose until sufficient flying speed is recovered.

You will love the endless knife edge passes and be excited by what Gee Bees do best – go fast and turn left, followed by dizzying victory rolls! Did you ever hear the whistling of the flying wires or the howling of a big round cowl of a Gee Bee roaring by? It’s enough to make your heart race and and your hands sweat! The CARF Gee Bee will take you back to those marvellous days of the Bendix and Thompson Trophy races. And one thing is guaranteed – your new CARF Gee Bee R2 will make you the star of the show wherever you show up!

An extensive re-design has recently been completed and the CARF-Models GeeBee is again available – better than ever.

When your CARF Gee Bee R2 arrives, you will be amazed at two things: First, its size. Words like ‘voluminous’ and ‘cavernous’ come to mind. Second, the minimal parts count. Besides the revised and updated instruction manual, wood parts and hardware, there are only 8 main pieces: Fuselage, two wing halves, stab/elevators, wheel-pants, engine dome and a pony-keg-sized cowl!

The fuselage is completely formed while scale rib/fabric “sag” has been molded in, duplicating the original in all the right places. Heat louvers are formed, simulated fastener detail is evident and CARF has even duplicated the “rivet dimpling” one would find on the aluminum structures of the full-size. Carbon fiber matting is added in high stress areas, while all formers and bracing are glued in place and the characteristic red and white scallop scheme gel-coated in the molds!
You will notice the vertical fin has molded-in “right offset” just like Delmar’s and that the canopy frame is integral to the fiberglass fuselage. This Gee Bee even features a scale working door which will also function as access to the model’s interior once the engine dome is bolted in place. 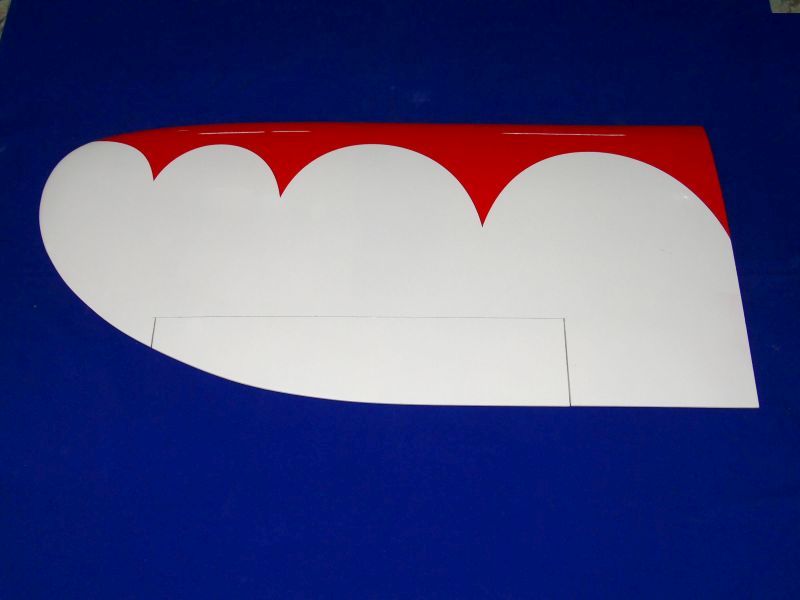 The innovative team at ARF has produced an exact scale replica of the famous Gee Bee racer, down to its modified M6 ‘reflex’ airfoil. Indeed, the CARF 93” span R2 is the most accurate rendition of this airplane ever kitted. While many other versions have come and gone, perhaps the venerable CARF offering thrives simply because it holds so true to the original and proves that the empennage, airfoil, span, gear, and length do not have to be altered to produce an authentic flying R2 replica. Until now, achieving a scale Gee Bee airfoil just wasn’t feasible using conventional techniques. The very slender scale airfoil is only possible using CARF’s unique composite stressed skin construction process. Flight surfaces are laminated in the molds, permanently attached by a special nylon hinge cloth sandwiched between the outer skin and the foam. The process produces a gap-free hinge and eliminates lots of work! The revised wing halves now come with aileron servo hatches, flying wire reliefs, and the carbon fiber locating dowels are now pre-installed. Like the rest of the kit, the red and white scallops are gel-coated in the molds. No painting, no wrinkles, no sags! 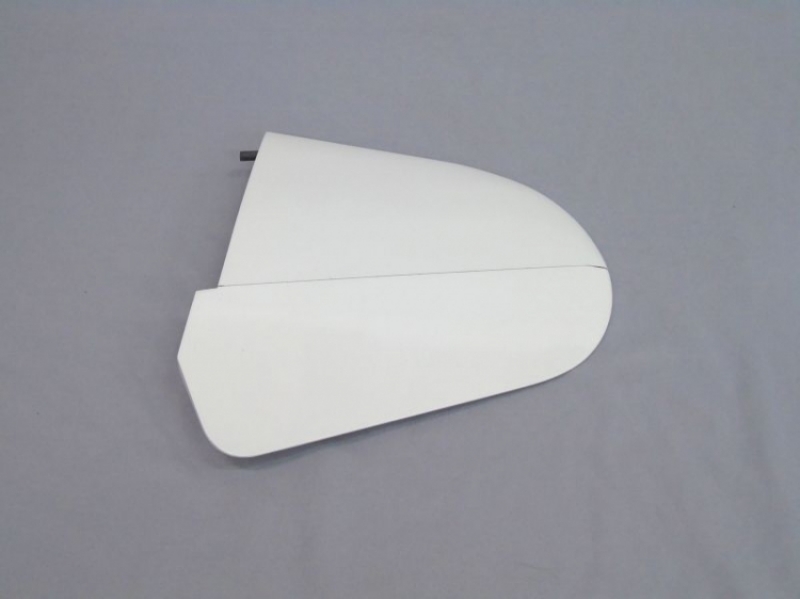 Our new and improved Gee Bee now features pre-hinged and clearanced rudder, adding accuracy and speed to the construction process. And while other kit designers have felt compelled to enlarge the Gee Bee’s tail surfaces in search of elusive ‘sport plane handling,’ CARF has taken a more traditional and sound approach, believing that when it comes to this historic racer, imitation is the sincerest form of flattery; thus we have NOT deviated from the original’s planform. Have we been successful? Consider, while most other renditions are now extinct, our Gee Bee is still going strong! We believe Howell ‘Pete’ Miller and the Granvilles knew very well what they were doing – dittos Delmar Benjamin and Steve Wolf. Shouldn’t you? 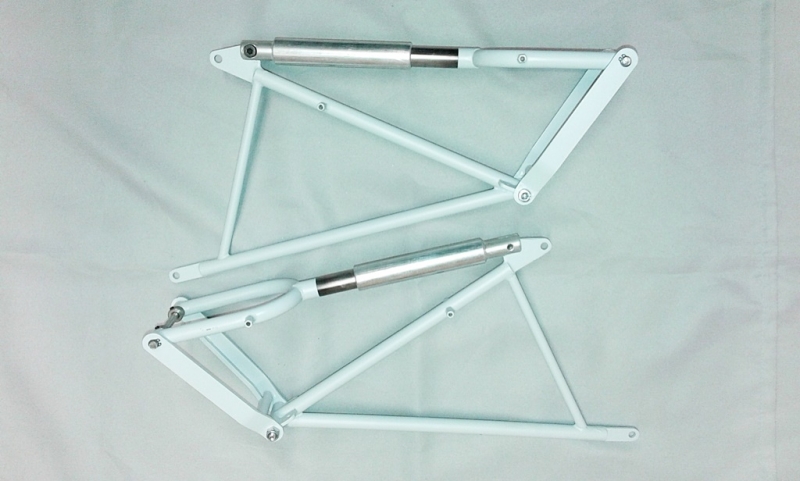 The key to successfully landing a Gee Bee racer (besides superb piloting skills), is superb landing gear. That is correct! The best landing approach and touch-down is of no use if the aircraft’s undercarriage conspires against the pilot by flexing, tucking, twisting, bouncing, locking up or is simply in the wrong location!

After extensive testing, CARF has developed a scale oleo/scissor landing gear system which works with, instead of against, the pilot. The 7” wheels have been engineered specifically for this gear/this airplane. The landing gear operate exactly as the full scale and are strategically located to maximize landing success while adhering to the original’s scale fidelity.

Balanced properly, the Gee Bee resists nose-overs. The large wheels and oleos absorb less-than-perfect touch-downs and grass runways. And the entire undercarriage is anchored resolutely to the aircraft’s wing and fuselage structure by way of scale flying wires – just like the full size. Why mess with success? After a little practice, you will have your Gee Bee landing like a dream (not a nightmare!) and only you will know the secret. It’s the GEAR! 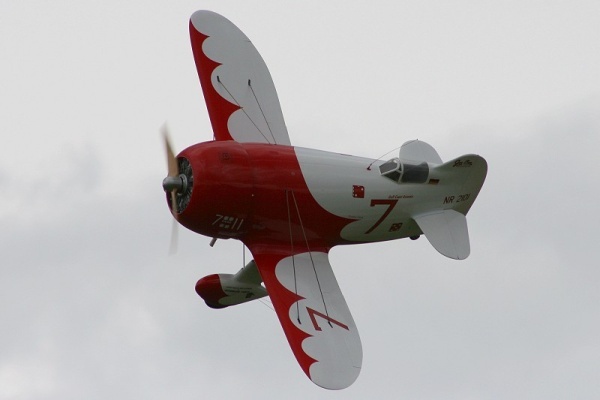 Like any high performance tail-dragger, the Gee Bee will require some rudder input during its take-off run. If you have flown a large warbird, this should come as no surprise and will be a very similar discipline with the Gee Bee. Throttle up slowly and deliberately, staying ahead of the aircraft; as the tail lifts off, the Gee Bee will achieve flying speed very rapidly and can be rotated immediately. Climb to a safe altitude, turn around, throttle back to approx. 2/3 throttle and trim out the aircraft for hands-off, straight and level flight. This may require several passes as the Gee Bee gobbles up sky very rapidly. This is, after all, a PYLON RACER!

Once the Gee Bee is properly trimmed, try to relax and enjoy your creation. This is, after all, why you built this thing, right?! When you have achieved a level of comfort with the plane, try some high and low speed passes. Be aware that banking the Gee Bee to the left generally results in a nose-high attitude (at knife edge) due to the right engine thrust and right fin/rudder. Conversely, banking the Gee Bee right will result in a nose-down attitude. Remember, these aircraft were built to do one thing very well – GO FAST AND TURN LEFT. Some compromises must be made in other flight modes.

When it is time to set up for landing approaches, start at a fairly high altitude just to confirm you can in fact fly the pattern. Once you can 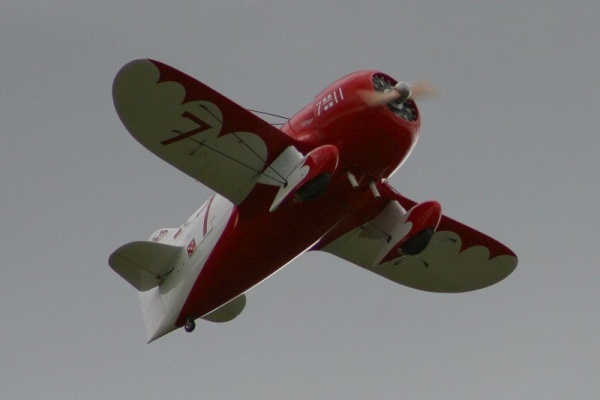 establish a reliable approach and fly the Gee Bee directly down the runway, lower your approach speed. The Gee Bee is NOT a sport plane so do not attempt to line it up and chop the throttle. This airplane must be flown onto the runway – this means the throttle is gently pulled back for a shallow sink rate and maintained at a high idle until touch-down is immanent. ONLY at that moment should the engine be brought back to idle. Once the Gee Bee touches down, STAY AHEAD of the rudder.

DO NOT RELAX. The Gee Bee landing gear provides a very stable landing platform, but rudder input is integral to maintaining directional stability. It is also VERY HELPFUL to apply full up elevator the moment flying speed is lost (generally on touch down) as this will keep the tail planted and reduce the possibility of a nose-over. This is a habit every pilot should adopt any time his airplane is taxiing.

CONGRATULATIONS!!! Now that your first flight is behind you and you have had a chance to take a bow, change your shorts, shake many hands and answer a million questions, you should go completely over your Gee Bee. Check EVERYTHING! Now….. fuel up again and fly it again! While it is tempting to pack up and depart as a “hero,” having flown the Gee Bee successfully, you will never master this aircraft until you can fly it without those first-flight jitters and land it consistently. Another couple of flights while the handling of the aircraft is fresh in your mind and you still have a level of confidence, will go a long way towards making you real Gee Bee pilot – and not just a guy who flew a Gee Bee. 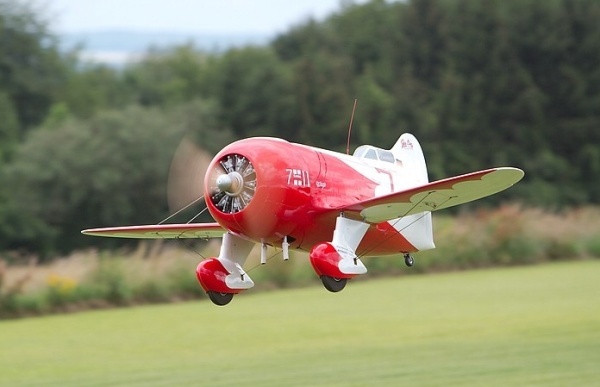 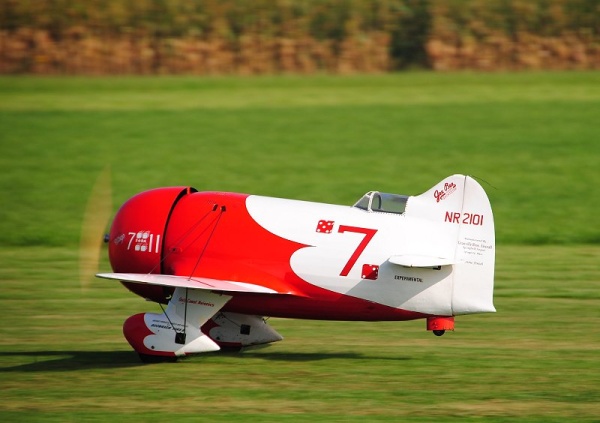 Convinced? Then contact your Sales-Rep and get your Gee Bee R2 today!

More Information
Reviews
Write Your Own Review
Only registered users can write reviews. Please, Sign in or create an account
To Top